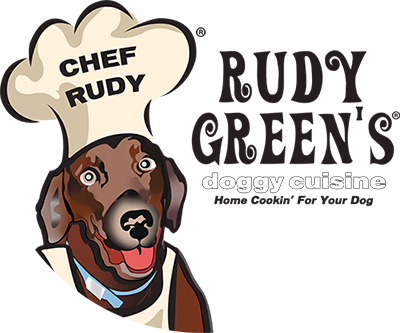 HOME COOKIN’ FOR YOUR DOG 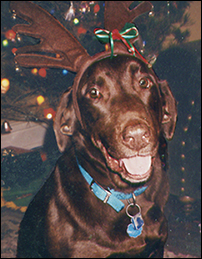 The Rudy Green’s Doggy Cuisine company was created and named in honor of a big brown dog named Rudy Green, who was stricken by a bleeding ulcer from altering arthritis medications in July of 2006 at age 14. His normal diet of good quality (senior) dry food, topped with a ration of grocery store brand canned food and occasionally table scraps had to be changed to a special diet.

As any good dog mom would do, I cooked exactly what the vet recommended for Rudy each day; beef liver and brown rice. In the interest of fairness and to keep the peace, I fed my other 3 dogs a share of this bounty, atop their normal bed of kibble. The next day as I prepared the meal meant for Rudy, a saliva soaked kitchen floor hosted an audience of 4 – enrapt and intently focused on my every move.

Dog Dinner Time quickly became an anxiously awaited event. The anticipation, joy and enthusiasm were pure; the gratitude was obvious. Weeks later Rudy’s ulcer healed, and I was relieved not to slave over an August stove for my pack every day. The cuisine du jour gradually returned to kibble ala can. The reviews of which were unanimously unfavorable. With Rudy as their leader, the forces united; depression and malcontent led to random acts of rebellion, ultimately hunger strikes were threatened!

Such expression of disappointment finally induced a “doggy guilt trip” strong enough to provoke me to buy expensive and “highest quality” moist foods. Curiously I read dog food labels for the first time – I was puzzled by the names; what exactly is a “prime cuts (with beef) in gravy” dinner for dogs? Ingredient lists had things like by-products and meat meal which required some research to decipher. I was appalled and astounded by what I discovered. Even more remarkable was that my dogs were not only brilliantly adept at group manipulation, but evolved enough to recognize the difference between the culinary equivalence of a happy meal vs. the 7 course prix-fixe at Lutece. This dilemma led me to talk with veterinarians and nutritionists. The consensus confirmed my belief that a high quality dry diet is beneficial for most dogs but real meat, vegetables and grains would be even better. So just like oatmeal is good for humans, the sole consumption of one food, no matter how healthy, can not afford the same physiological benefits as a varied diet. Not to mention the deprivation of one of life’s most sensual pleasures such monotony would cause.

Possessing a passion for food rivaling my love for dogs, I knew what I had to do. With the help of Dr. B and the encouragement of Dr. Hope, and a lot of nutritional research, I came up with recipes to replace the store bought canned foods. I utilized ingredients on sale each week at the grocery and health food store and cooked large batches at a time, freezing individual portions. After each meal was unanimously approved by my “panel of experts”, I sampled them to other dogs whose parents I knew, explaining my theory and sharing the information I had learned. While a few people thought it an absurd, albeit amusing concept, most were as enthused and intrigued as I. The initial feed trial results were overwhelmingly positive. Every dog that tried it responded just like mine had. This frozen, home cooked, people food for dogs was a huge hit!

I then sought the counsel of successful business people and information from a variety of resources. Following good advice I did a formal “beta test” or “market study” by giving samples of a valuable novel product to a target audience, asking that they respond anonymously to a SASE questionnaire. My hunch was confirmed by objective consumers that treated their dogs like family. So I took a big step, wrote a business plan, got a loan (eeks) and created Rudy Green Inc. in August of 2006. Destiny has enabled me to place my “People food for Dogs” in several local stores less than a year later.

I believe in this product; my motivation comes from my desire to improve the quality of life for as many dogs as possible. My goal is to sell enough RGDC to make the percentage donated to animal shelters significant. I hope that it may even help “raise the bar” for the quality of pet food ingredients in some small way. And, I KNOW FOR SURE THAT IT WILL MAKE DOG DINNER TIME a CELEBRATION for the LUCKY DOGS to whom it is served… Like yours, maybe?